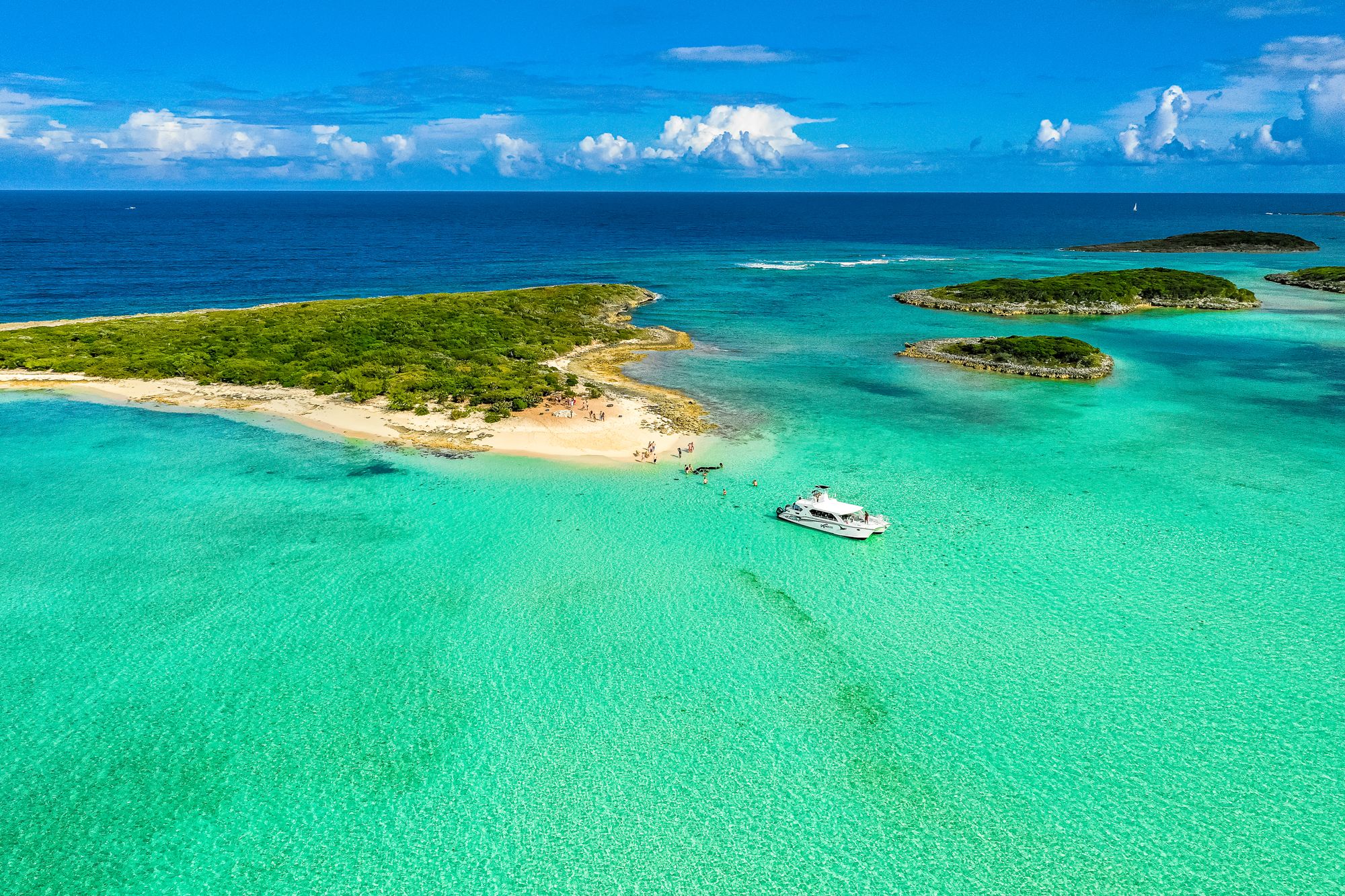 The Bahamas is one of the most well-liked destinations for vacations. It’s the perfect location for families and couples because of the warm climate, stunning ocean views, and welcoming inhabitants.

However, traveling to the Bahamas is quite a challenge because you have to cross the ocean by ship or airplane. You might question whether you are actually in the United States while on your trip.

What you need to know about whether or not the Bahamas are a US territory is provided below.

Are the Bahamas Part of the US?

The Bahamas are not a part of the US, no. Since the US does have some of the nearby islands as part of its territories, it’s possible to mistake the Bahamas for one of those areas.

The fact that the Bahamas are a part of the Americas only serves to complicate matters. The Bahama islands, meanwhile, have never been a part of the US. In actuality, they were originally a part of the Lucayan race.

The Lucayan archipelago, of which the Bahamas is a part, was home to Lucayan settlements and populations. After being “discovered” by Christopher Columbus, the Bahamas would eventually fall under Spanish control.

Spain gave the island to the UK following the Treaty of Paris. Up until 1973, the islands were a part of the British Empire. The Bahamas were therefore a part of another nation, but it was the United Kingdom, not the United States.

When Did the Lucayan People Live in the Bahamas?

There were a number of populations residing on the islands that would later come to be known as the Bahamas long before Columbus arrived and claimed them for Spain. They belonged to the Lucayan race. The natives had previously resided in the nation that is now known as Cuba.

They were dependent on the ocean for food and resources, like many other islanders are. The natives would move from island to island in search of more resources and fresh territory for settlement. As early as 300 and 400 AD, they eventually made their way from Cuba to the Bahamas.

They began to establish settlements and used the ocean as a source of food. The Lucayan people had created robust societies with sophisticated political structures between the years 900 and 1500 AD. The Bahamas were discovered and colonized by the Lucayan people.

When Did Columbus Arrive in the Bahamas?

Christopher Columbus was tasked with charting out the western portion of the world during the Age of Exploration. Since few people thought there was any land so far west, many felt he might simply end up back on the eastern side of the planet.

People who thought the earth was flat were worried he might accidentally sail off the edge. Instead, Columbus “discovered” numerous new countries. The Bahamas was one of those places. On the island that would become San Salvador, he arrived in 1492.

Baja mar, which is Spanish for “shallow sea,” is how he described the islands. The term was the source of the name Bahamas. There were 400,000 Lucayans living on the island when he arrived. They were tranquil people that welcomed Columbus’ explorers with openness and curiosity.

Sadly, their calm demeanor would prove to be their downfall. They became easy pickings for slavery as a result. Nearly the entire Lucayan population perished from sickness, was slaughtered, or was sold into slavery 25 years after Columbus’s arrival.

What Was the First English Settlement in the Bahamas?

Columbus and the subsequent Spanish conquistadors and slavers arrived in the Americas in 1492, but the first English settlement wouldn’t come about for several years. The sea brought a group of English settlers known as puritans in 1649.

The Eleutheran Adventurers were a specific group of puritans. They traveled to the Bahamas in search of unrestricted access to their religion.

They were unable to practice their faith as they desired back in England. After sailing to the Bahamas, they discovered that it was challenging to settle there.

Their traditional farming practices didn’t quite work in the tropical climate. They knew nothing about the soil either. The colony requested assistance from the Massachusetts Bay Colony after it began to starve.

The rescue effort was under Captain William Sayle’s direction. They were saved when he returned to the Bahamas with the supplies the colony had given him.

As a token of their appreciation to the colony for the supplies, they sent brasileto wood. The wood would give the business the cash it needed to buy the land that would one day become Harvard University.

Were the Bahamas Part of the Age of Piracy?

The Bahamas were crucial to the Age of Piracy. On the Atlantic Ocean, pirate activity peaked between the 1600s and 1700s. The American colonies and European countries had begun to trade.

After crossing the Atlantic, trade ships may stop in the Bahamas to refuel or take a break. They became top targets for pirates as a result of that. Pirates could easily operate in shallow waters.

It allowed them to avoid navy ships or bury their loot for later discovery when it was secure. Some even created pirate havens as a place of safety on the islands.

Blackbeard and Calico Jack were two of the most well-known pirates to reside in or at least conduct part of their business in the Bahamas.

Two more well-known pirates who made use of the Bahamas were Anne Bonny and Mary Read. When pirating, they pretended to be men. Even today, there are still thought to be undiscovered treasures on the Bahamas islands.

The port of Nassau was one of the most significant pirate havens created during the Age of Piracy. Beginning in approximately 1670, the village spent several years under the control of pirates and other lawless men. In the end, Nassau would be destroyed twice.

It was initially demolished by the Spanish, and afterward, it was also destroyed by French and Spanish soldiers. However, the settlement held up.

When Did American Colonists Come to the Bahamas?

By the 1700s, although Americans had been visiting the Bahamas for some time, they still hadn’t moved there in great numbers. That did not take place until 1783. After the American Revolutionary War, some colonists in America continued to aspire to be a part of Great Britain.

They were loyalists who discovered themselves alienated in a nation that had just gained independence. Some Loyalists traveled back to England. Due to Great Britain‘s control over the Bahamas at the time, some people also chose to relocate there.

The excursion was perfect because the islands were near the American colonies. Additionally, it enabled the Loyalists to maintain their independence while continuing to pay taxes and profit from being British citizens.

Particularly to aid in the island’s settlement, the Loyalists traveled to Eleuthera. English settlers who had arrived with the puritans several years earlier made up the majority of the settlement.

However, Spanish colonists were also numerous in the settlement. The loyalists brought their knowledge of shipbuilding and their slaves.

They were also adept at constructing and farming. Eleuthera was improved by the English immigrants with the aid of the Loyalists, making living there simpler and more delightful.

They were able to drive out the Spanish colonists and armies who had established themselves there thanks to their newly obtained independence. They did this without using force. The Loyalists’ decision to settle in the Bahamas instead of America strengthened Great Britain’s hold over the islands.

How Did the Civil War and Prohibition Affect the Bahamas?

Although the Bahamas are not a part of the United States, portions of US history nonetheless had an impact there. Prohibition and the American Civil War were two of those significant historical occurrences. The Bahamas had a rare chance to become explosively wealthy during the Civil War.

Along with other agricultural products, cotton was produced in the southern region of the United States. Most of the cotton used in the British Empire came from the South.

One of the first actions taken by the Union army during the Civil War was to establish a naval blockade close to the southern shipping ports.

This made it impossible for the Confederacy to conduct direct business with Great Britain. Instead, runners traveled to the Bahamas using cotton. The British visited the islands to conduct business and left with the cotton they had come for.

The Bahamas was successful in making a sizable profit by acting as a middleman. The South didn’t make any money, but it made enough money from the trade to keep it going until the Civil War was over. The blockade was no longer necessary after the war was over.

The Bahamas no longer served as an intermediary. At least, it was up until the 1920s, when Prohibition was instituted.

When it was made illegal to sell alcohol, the Bahamas discovered a rare opportunity to once again become wealthy. Nassau’s Prince George Wharf has been enlarged by the government.

This made it possible for them to continue bringing expensive alcohol into the United Nations. The Bahamas’ economy was devastated by the loss of revenue when Prohibition finally came to an end.

What Was the Hotel and Steam Ship Service Act of 1898 in the Bahamas?

Government officials approved the Hotel and Steam Ship Service Act in 1898. The government received the money it required to make investments in the tourism industry.

They purchased a fleet of steamships, built new hotels, and made infrastructure investments. The intention was to draw tourists to the Bahamas.

In the Bahamas, tourism was already well-liked, but it mainly catered to the wealthy. Rich Americans frequently traveled to the islands during Prohibition to obtain alcohol or host parties for their friends.

The Act aims to open up the Bahamas to more people. The closure of Cuba was a significant role in the Bahamas’ tourism industry. Americans began visiting the Bahamas once they were unable to travel to Cuba. They were able to find the same kind of tropical weather there.

The Bahamas and the United States developed a unique bond. Those visiting the islands simply required a passport to remain and take advantage of everything the island has to offer. To visit the islands, everyone else needs a passport and a visa.

The Bahamas’ future as a tourist and vacation destination was paved with the support of the Hotel and Steam Ship Service Act.

When Did the Bahamas Become Independent?

The Bahamas technically belong to Great Britain even though they are far away, thanks to the Treaty of Paris. However, the Bahamas gained independence on July 10, 1973. The island nation had been ruled by the British Empire for 325 years prior to that.

The Bahamas needed to stand on its own two feet and make the decisions it wanted to make for its people, even though it was largely peaceful.

The Commonwealth of Nations accepted them as a member. They commemorate their Independence Day on July 10th, much as Americans do on July 4.

Did the US Ever Own the Bahamas?

The Bahamas were never under US control. The town of Nassau was, however, briefly under the authority of US forces. Nassau was taken over by the US navy during the American Revolution.

The colonists had to make sure that British forces weren’t using the islands as a staging area for their troops because they were then under British rule.

However, they only occupied the harbor for a short time before leaving. Therefore, this was the closest the US has ever been to controlling the Bahamas.