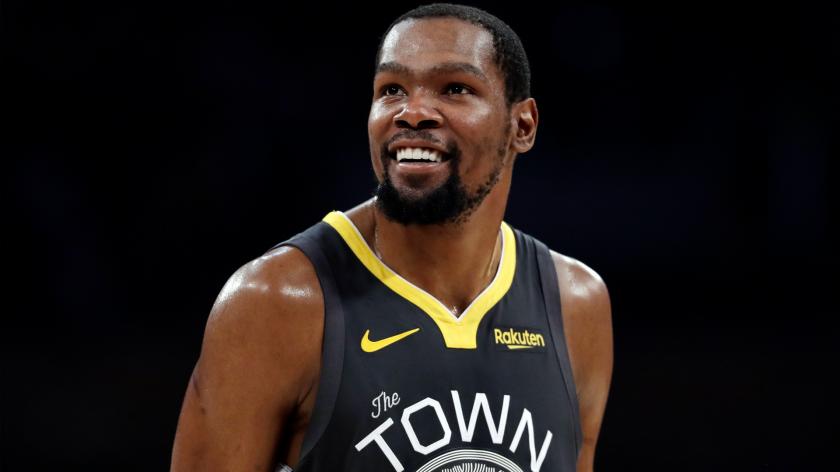 Most Kevin Durant’s fans around the world are sometimes confused about the true height of their favorite NBA player. Do you want to know? Continue reading!

Kevin Wayne Durant has quickly risen to the top of the NBA after a few seasons. Although he plays small forward, he is capable of playing a wide range of positions.

He is also regarded as one of the game’s top pure scorers and shooters.

This article will tell you everything you need to know about Kevin Durant, including his real height. Let’s get started!

The letters KD are also used to refer to Kevin Wayne Durant, who was born on September 29, 1988.

He is an American professional basketball player for the National Basketball Association’s Brooklyn Nets (NBA).

The Seattle SuperSonics selected him as the second overall choice in the 2007 NBA Draft after one season of collegiate basketball for the Texas Longhorns.

Before joining the Golden State Warriors in 2016, he spent nine seasons with a team that later became known as the Oklahoma City Thunder, winning NBA titles in 2017 and 2018.

He signed as a free agent with the Nets that summer after suffering an Achilles injury during the 2019 championship series.

Many people consider Durant to be one of the best players of all time.

How Tall is Kevin Durant?

As a young 19-year-old fresh out of Texas University, Kevin Durant joined the league.

They listed him as a 6-foot-9 small forward. Since then, there have been series of lingering questions about Kevin’s height, and he never addressed the topic.

Kevin Durant had been keeping a significant secret from the NBA for many years.

Players in the league frequently lied about their stated height. Up until a few years ago, KD also kept his official height a secret from the public.

However, Durant revealed his height in 2016, when he was still a member of the GSW.

Durant told Bob Fitzgerald of KNBR his actual height during an interview.

“They just ask me so much…yeah, I just like messin’ with people.”

The 2014 MVP also revealed the real reason he had been lying about his height for so long in a Wall Street Journal interview.

“Really, that’s the prototypical size for a small forward. Anything taller than that, and they’ll start saying, ‘Ah, he’s a power forward,”.

As the NBA became more positionless over the past ten years, it became less of a problem.

The fact that Durant is a rare combination of size, shooting, and ballhandling is a plus.

They selected him for the NBA’s 75th-anniversary squad because of his wonderful combination of skills and stature.

The Crackdown in NBA Measurements

The days of Kevin Durant lying about his height by one or two inches came to an end in 2019.

According to Dennis Young of the New York Daily News, the league forced players to measure them without wearing their shoes. Their stated height was that measurement. No more speculations.

A few players became taller. Others had height loss.

Robert Williams, a big man with the Boston Celtics, lost some of his big man status after his official height was reduced from 6-foot-10 to 6-foot-8.

During the 2019 free agency period, Kevin Durant transferred from the Golden State Warriors to the Brooklyn Nets.

They traded him to Brooklyn in exchange for D’Angelo Russell, Shabazz Napier, and Treveon Graham, and he signed a four-year, $164.2 million contract.

The Brooklyn Nets have undergone a three-year transition, overseen by Sean Marks and head coach Kenny Atkinson. They thought Kevin Durant was the ideal player to assist them.

Although some of the top players in the National Basketball Association were signed by the Brooklyn Nets, the squad appeared to have crumbled.

Kevin Durant may have been sent there to assist the New York team win, but the Brooklyn team is not doing any better.

Many of the team’s newest stars, like Kevin Durant and Ben Simmons, have drawn criticism from basketball fans in general as well as from Nets supporters.

No one really knows what happened to Durant between his departure from the Golden State Warriors and his signing with the Brooklyn Nets, but it appears like Charles Barkley and Shaquille O’Neal think they do.

Kevin Durant and Rich Kleiman launched 35 Ventures in memory of the Golden State Warriors player who wore the number 35.

Durant has been able to invest his money in the kinds of businesses that the All-Star wants to surround himself with.

The 10-year, $300 million contract Durant inked with Nike in 2014 has contributed significantly to his wealth.

Also, he has received significant endorsement deals from organizations like Google and Alaska Airlines.

Kevin Durant and his investment firm also funded the online network “Creatively”, which helps employers locate creative talent and makes it simpler for creatives to be employed.

Many of the companies that Durant chooses to invest in are pioneers in their respective industries, such as Memora Health, which seeks to revolutionize how consumers get medical supplies and pharmaceuticals.

Durant is undoubtedly one of the most distinctive players in the league’s history.

However, Kevin Durant can be anything he wants to be, as long as he continues to put the ball in the net on a regular basis.